Doris, a divorced mother of two, has reached a dead end at the age of forty-five. However, after a string of setbacks, supported by her best friend Tim, she rediscovers her independence and self-confidence and restores her faith in love.

As her forty-fifth birthday approaches, Doris Doorenbos, a separated mother of two children (Willem (17) and Sien (14)), feels stuck in life. While all the people around her make careers and lead busy, adult lives, little has come of her own dreams. She lost her job, has a difficult relationship with her ex-husband Walter and is in big financial trouble. While Walter is making a career abroad and her best friend Tim is a successful presenter of a daily news show, Doris mourns her father, who died unexpectedly a year ago, watches TV shows like No going back and The Great Bake Off and stares at the Instagram accounts of people who do have successful lives, pho-togenic pets and well-trained bodies. Supported by Tim and her sister Sarah, Doris courageously starts looking for a way out of her problems.

But obviously, that’s not going to be easy. First of all, for a forty-five-year-old woman without education, the nice jobs are not up for grabs. And how do you find a new love, if you have two very critical adolescents at home, with whom you form such a fragile trinity, that you can’t imagine that someday someone would fit in? And as if that weren’t complicated enough, Doris has been having some very romantic dreams about Tim, lately. Is it perhaps time to realize that their now thirty-year-old friendship has grown into true love?

DORIS is about a woman of flesh and blood. About a woman with anxiety at-tacks, pain and caked pans. About a heroine who knows that life is not a pink cloud. But she’s also a woman who, despite everything, continues to dream big and compellingly, about well-spoken women and shy men who find happiness and comradeship, forever and ever. 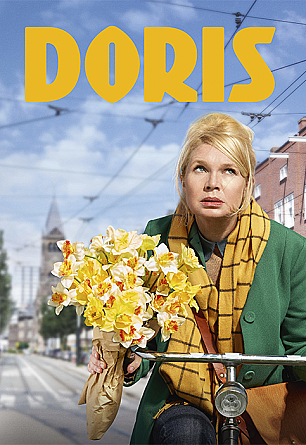